Review of "My Place to Play" in Rotterdam, NY | Kids Out and About Albany

Review of "My Place to Play" in Rotterdam, NY 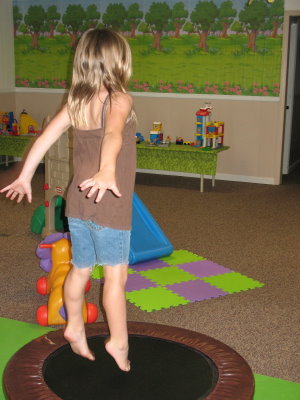 My Place to Play is an indoor play space in Rotterdam (between Guilderland and Schenectady) that offers afternoon free play, birthday parties, a preschool program, and a 2-year-old drop-off program on Friday mornings. It’s recommended for ages 1 to 7. Admission to play is $5 per child, with babies-in-arms free. Frequent-visitor punch cards and discounts for groups of 10 children or more are also available.

My Place to Play feels a bit like going to a playdate with a solicitous hostess who has toys in every room of her house. There’s a large room with climbers and slides, a mini-tramp, a space devoted to infant-friendly toys, some mom chairs, and a vast Little People set-up. Just off the main space are two smaller rooms that serve as a pretend grocery store and a garage with train tables, tool benches, and vehicles. Another room offers a “big-kid” air hockey table and foosball table. There’s a snack room that’s partitioned (but still visible) from the main area. Tucked behind the main space is a party room that’s bigger and more attractive than most party rooms I’ve seen.

I have to admit that when I first walked in, I was a bit underwhelmed. My Place to Play only opened in April, and the owner, Kay Masick, is still testing what works, rearranging, and deciding on how to decorate the whole space. Many of the toys available were similar to those at my—or my friends’—houses. Plus, my daughters are almost-7 and 9, so I feared that they’d be bored and begging to leave quickly.

But, guess what? They played, and played, happily. (See more below photo.)

One perk is that once you’re in, there’s nothing else to buy. An air hockey table that that would cost a token per game at Chuck E. Cheese invites plenty of free play. There’s no food served, but visitors can bring their own. Since I often find myself trying to smuggle in food that’s cheaper and more healthful than your typical “play place” options, the freedom to bring food without hiding is a relief. But if you’re in a pinch, there’s a nearby McDonald’s drive-through and a pizza place that delivers (ask Masick for a menu).

The result is an outing that’s inexpensive, pretty relaxing for the adults, and fun for the kids. Masick is a local mom who recognized the need for indoor play areas when her kids were younger, and it feels a bit like a Joyful Jumpers vibe, if you’ve visited that Colonie play space. For both, there’s a casual welcome and comfort in knowing that the staff will understand if your child completely melts down, for example. Masick plans to continue improvements and acquiring new play equipment, and My Place to Play would benefit from some bigger, more unusual stuff. Her current playtime hours are afternoons only, which poses a problem for the many 1- to 7-year-olds who are nappers. But she occasionally opens in the mornings for regulars, and hopes to expand hours as well as play equipment as the business gains momentum. That said, it’s already an enjoyable way to spend an afternoon. We were there a good three hours, which I didn’t even realize until we were driving away. My kids would have stayed longer and predictably, our toddler guest didn’t want to leave at all. After confirming with us that it was okay, Masick offered all the kids lollipops on their way out the door, explaining, "It's a good distraction when moms are trying to get their kids in the car."

My Place to Play has an Open House on Saturday, July 30, 2011 from 10 am to 6 pm. For $5 admission, kids can play, plus there will be a bounce house and iSmile Studios taking complimentary photographs.

© 2011, Katie Beltramo. Katie is the editor of KidsOutAndAbout.com for the Capital District, and also blogs at CapitalDistrictFun.com.