Review of Almanzo Wilder Homestead and Malone, NY | Kids Out and About Albany

Part of KidsOutAndAbout.com's series on family trips in the Adirondack region

I'm not knowledgeable enough to call myself an American history buff, but I do get a rush from visiting places with which I have some kind of personal connection. I had heard ecstatic whispers about how beautifully the Almanzo Wilder Homestead has been maintained and enhanced since a nonprofit foundation assumed responsibility for it in the late 1980s.

As an avid fan of the "Little House" series for more than 30 years, and as someone whose kids know Farmer Boy backwards and forwards, I was eager to trace my fingers on the very same wall where Almanzo threw the blacking brush at Eliza Jane, to wade in the same river where they washed the sheep, and to sit on the same stoop where Almanzo slipped his pig, Lucy, that fateful piece of taffy. I was excited to plan a weekend where my girls (Madison, 11 and Ella, 9) could connect with life 150 years ago.

The result? One thumb up and one thumb down. The house and grounds are terrific. But you can't access them without the tour, so the tour guide makes the experience. I'll bet that some of the tour guides are very good; we found ours disappointing. As Pa said in Little House on the Prairie, a "miss is as good as a mile." Our tour guide missed. By a mile. 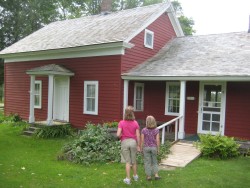 The house and grounds

The Wilder Homestead is located in Burke, New York, a few miles east of the small city of Malone, Franklin County, New York. Franklin County is in the very northernmost part of the state, about 10 miles north of the Adirondack Mountains and about 30 miles south of the St. Lawrence River. The Homestead is on 88 acres owned by the Almanzo and Laura Ingalls Wilder Association, a private foundation composed of individuals dedicated to preserving this corner of history.

The museum consists of the house itself, which has stood at the same site since it was constructed in the 1840s, and the nearby barns. The apple orchard and kitchen gardens are maintained by volunteers, and across the road you can wander down to the very same part of Trout River where Almanzo and his father would fish. There is also a small museum attached to a Visitor Center/Gift Store.

The house itself is gorgeously preserved, and painted in the original red. Although the barns burned in a lightning fire in the 1960s, the Association has had them reconstructed, taking pains that they match the originals as closely as possible. (No photos are allowed to be taken inside the house proper, so I can't show you exactly what it's like in there.) The Association is in the process of constructing a schoolhouse to match the one the Wilders attended in nearby Burke. 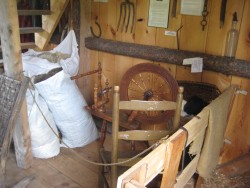 The house indeed transports the visitor right into the world of Farmer Boy. Almost nothing inside is original to the Wilder Family, but the Association has taken pains to furnish it with furniture and artifacts from the mid-to-late 19th century. Several labeled photos of the Wilder Family, which hang on the walls, give visitors a rare glimpse of Almanzo's relatives. For just $1, I purchased a lovely booklet written by Dorothy Day Smith, whose energy and work formed the Association; the booklet filled in a lot of the backstory nicely.

A visitor to the Almanzo Wilder Homestead doesn't simply wander through the house, grounds, and barns; the entrance fee ($7/adults, $4/kids) includes a guided tour. The tour, which runs periodically throughout the day (there's never too long a wait for it), is 60-90 minutes long. The problem is that -- aside from the thrill of being in the same rooms described so engagingly in Farmer Boy -- the value of the Almanzo Wilder Farm lies solely in how good the tour is. You won't know until you get there who is conducting your tour, and it's important to know this before making any pilgrimage you may be planning. 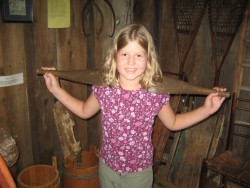 The young woman I spoke with on the phone before we drove the 4 hours to Malone was wonderful. She knew what she was talking about, and her voice communicated her love of the museum and its mission. She had me excited about visiting. Unfortunately, this made our actual experience at the house that much more disappointing. I admit that my family is probably a bit more fact-driven than typical visitors, and we asked lots of questions. Our tour guide didn't know a lot of the answers. That in itself was not necessarily a problem, but sometimes, she snapped off answers that were clearly incorrect; more often, she manifested a level of apathy toward the questions whose answers she didn't know. She was clearly mystified as to why anyone would care.

The fact is, I can imagine that other visitors have had experiences exactly opposite ours. Take that same wonderful setting, a house perfectly preserved to give a sense of 19th-century farm life, and a well-informed professional tour guide, and you get an ideal way to generate a love of history in young people who visit. 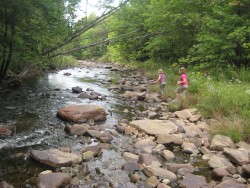 Allocate about 2 1/2 hours for the house tour and museum.

Afterward, wander down to Trout River (about 1/4 mile across the road and through a nice wooded trail). Signs tell you not to wade (I'm sure the Association dreads being held responsible in case of an accident), so we made our way down the stream on stepping stones, and spent a pleasant hour.

Click here for more about the Almanzo Wilder Homestead, where to stay, and where to eat, on page 2...