Why Don't We | Kids Out and About Albany 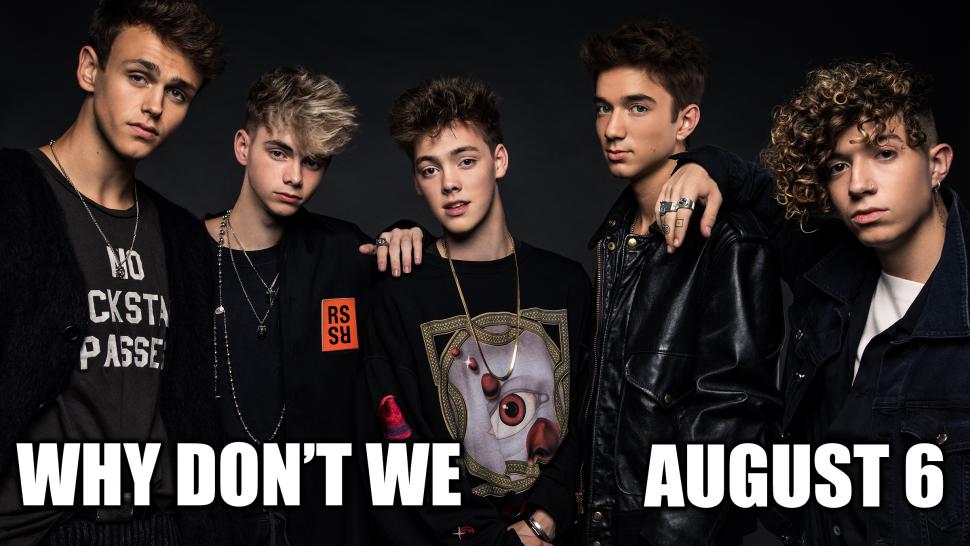 Since their formation in 2016, Why Don’t We haven’t stopped… Instead, these five young men—Jonah Marais, Corbyn Besson, Daniel Seavey, Jack Avery, and Zach Herron—have forged ahead at warp speed. Come see them perform live!
Click here for more information about this activity

Since their formation in 2016, Why Don’t We haven’t stopped… Instead, these five young men—Jonah Marais, Corbyn Besson, Daniel Seavey, Jack Avery, and Zach Herron—have forged ahead at warp speed. In under two years, they innovatively amassed a diehard fan base through grassroots engagement in the digital arena fueled by a prolific outpouring of new music, constant social media engagement, and sold-out cross country tours where online “likes” materialized I.R.L. into millions of screaming fans worldwide.

Prior to coming together, each member stood out as a performer in his own right. Jonah and Corbyn often livestreamed in-home performances to massive audience as Zach served up viral covers that generated tens of millions of views. Jack built a growing a subscriber base on YouTube, and Daniel etched a space in the hearts of viewers everywhere on American Idol. They crossed paths during tours and fan engagements in the midst of these burgeoning solo careers.

Soon, they found themselves on a group text where the idea of joining forces came up. Their collective response: “Why don’t we?”

Drawing on their respective talents and formidable followings, the group emerged as a phenomenon. Beyond generating over 300 million YouTube views and 200 million Spotify streams during that period, the quintet released five EPs—Only The Beginning, Something Different, Why Don’t We Just, Invitation, and A Why Don’t We Christmas. Along with singles such as the 2018 Ed Sheeran-penned single “Trust Fund Baby,” this avalanche of music represented an unconventional approach as their audience constantly received new music at a record pace. Why Don’t We carved out a place among pop’s elite on the entire iHeart Jingle Ball tour, including a momentous stop at Madison Square Garden sharing the stage with the likes of Taylor Swift, Sheeran, and more. They sold out their first-ever headline tour throughout North America and followed that up by selling out an even bigger headliner in 2018, including multiple nights in New York, Chicago, Los Angeles, and Toronto.

A tastemaker favorite, they lit up national television shows like Good Morning America and Live With Kelly and Ryan, among others. Rolling Stone dubbed them “An Artist To Watch,” and The Today Show described their meteoric rise as “one of pop music’s biggest breakout stories.”

This transformation into international renown resulted from a quiet grind as they angled toward superstardom the old-fashioned way—one performance at a time—whether online or on stage.