Rodgers & Hammerstein's Cinderella is at Proctors in Schenectady through Sunday, January 24, 2016. Should you take your family? Read on for KidsOutAndAbout.com's review. 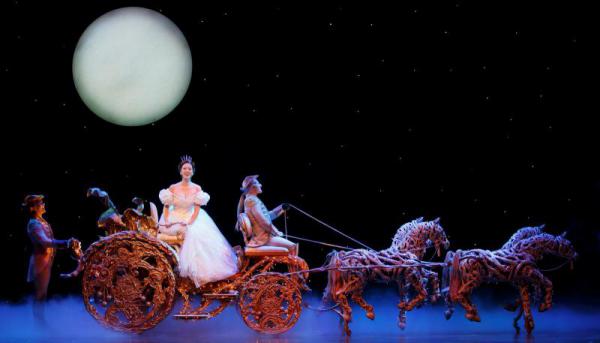 We all know Cinderella, and many of you already know the Rodgers & Hammerstein musical first produced as a live tv special with Julie Andrews in 1957. (Why, yes, as the mother of two daughters, I do own this DVD.) This updated version offers a few plot tweaks to update it, nudging Cinderella away from the passive damsel role into a position where she helps her prince to be a better ruler. Along the way, there's another romantic subplot, because the theme of this musical seems to be: More romance? Yes, please!

The Cast of Characters 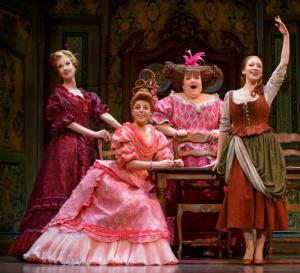 Our heroine, Ella, played by Kaitlyn Davidson, is utterly charming. Her voice is beautiful, and she's equally convincing as a forlorn moppet sitting in her "Own Little Corner" and as a princess bride. One of our favorite moments was when she squeal-sings in excitement after boarding her magical pumpkin coach. For Tuesday night's performance, her prince Topher was played by understudy Sean Seymour, and we thought he was excellent and appealing. Other standouts include Liz McCartney as Marie, the Fairy Godmother, whose gorgeous operatic voice soared between coaching sessions in which she sounded less magical and more like your favorite wise aunt. The two stepsisters were goofy and fun, with Kimberly Faure playing Gabrielle, the nerdy potential revolutionary with a deadpan delivery and Aymee Garcia, as Charlotte, whose outlandish going-for-width pigtails turn her into a walking spectacle that she plays to the hilt in the wonderful "Stepsister's Lament." Chauncey Packer, who plays royal herald Lord Pinkelton, also shows off an amazing voice.

Overall, the entire cast was talented and a terrific showcase for the tunes that make Rodgers & Hammerstein all-time favorite musical makers. Some of the new twists, though, made excellent actors' work harder. New character Jean-Michel, played by David Andino, is part protesting firebrand and part stumbling suitor, but neither side of him is compelling enough to overcome the fact that we're watching a story we know well and none of us have heard of this guy before. Similarly, the stepmother Madame, played by Blair Ross, veers between casually cruel (she made the audience gasp within moments of arriving on stage) and a sort of Christine Baranski character, someone who might be completely redeemable with a little hormone therapy.

The story is set in the woods, and before the show even started, my daughter and I admired the spotlight that created a sunlit effect through the trees. In fact, every set offers up beautiful fairytale-style imagery, from the "shabby chic" rustic cottage where Cinderella and her family live to the village square to the grand palace staircase, most beautiful in the final wedding scene, adorned gorgeously with flowers.

There are also several puppets who make an appearance, including a beast in the forest, the prince's steed, and Cinderella's woodland friends. If you or your kids are puppet enthusiasts, you'll love it. With the exception of the prince's horse, I didn't. For me, the early beast in the forest was too jarringly unfamiliar. The woodland creatures felt a bit too much like stuffed animals to enhance the story, although I think that a little one enraptured by the magical princess tale could love it. The ballroom scenes include elegant dreamy choreography, and as the prince and his men chase down Cinderella they throw in some fun acrobatics. 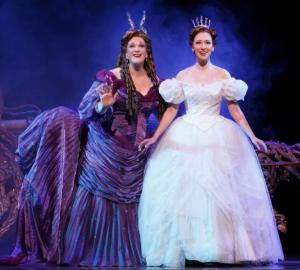 The costumes are gorgeous. If you or your children are looking for the full-on Princess Experience, they need look no further than this production, in which the fairy godmother obligingly transforms Cinderella into a fabulous outfit twice. Meanwhile, the rest of the ball scene is filled with a rainbow of gowns that range from the sublime to the ridiculous (poor Charlotte!). I am pretty sure that there were quite a few ladies in the audience who were even more enthusiastic about the proliferation of satin breeches. Not me, of course. I barely noticed. But most impressive of all were the gorgeous transformations from Cinderella's cinder-strewn peasant garb to ballgowns and back. Even as you saw that it took some doing, the transitions were fluid enough to look almost magical. Our favorite was when the golden gown seemed to fly right up the chimney.

Who Will Love Cinderella?

This show is completely family friendly, with no inappropriate language and very little innuendo or violence. I'm always on the lookout for potential hazards, because I know that each child has his or her own quirks, and the only thing I can think of that's a potential stumbling block is at the very beginning, when the prince is fighting a weird puppet creature that very small children could conceivably find scary.

That said, as a feminist I hate to categorize these things, but this feels like a full-on "chick musical." There are a few minutes of the prince and his soldiers fighting in armor, but there are hours of beautiful dresses, love, and romance. In fact, even for the young princess enthusiasts, there might be a bit too much of the mushy-gushiness. Much of the humor that's been injected into the story seems geared to ladies of a certain age, like when Marie the fairy godmother says, "You'd be surpised how many beautiful gowns have crazy women in them." Along with young families and grandmother-granddaughter pairings, there seemed to be quite a number of grown-ups having a girls' night out, complete with tiaras and glasses of wine for everyone, and they were having a terrific time.

Themes to Talk About as a Family

It's easy to start a conversation about this production, because what makes it different from other Cinderella stories we know are very conscious decisions to focus on particular themes. Without giving too much away, an obvious conversation-starter is what happened with Cinderella's glass slipper. When Cinderella frets that her invitation is torn, her fairy godmother admonishes her, "Don't wait for everything to be perfect!" You might also talk about how Cinderella helped transform the court through kindness.

Many little girls in attendance wore their own princess dresses, and I was surprised by how many women--little girls and grown-ups alike--were sporting tiaras. If you have a true princess enthusiast, you might suggest wearing these, and if they refuse, you might bring them along just in case they reconsider. The Cinderella folks are offering up a more-tempting-than-usual display of fabulous merchandise, including an adorable t-shirt with the quote "I can be whatever I want to be," a clock necklace, glass slipper socks, and a $30 tiara, so you might want to plan accordingly, whether that's bringing along grandma, telling your daughter to bring her own spending money, or stashing a dollar-store tiara in your purse.

Cinderella is a lovely musical with a terrific score. The actors' voices are universally strong, and the magical costuming and scenery lend the production a dreamy quality. Princess lovers will be enchanted and ladies looking for a night out will (wait for it) have a ball. 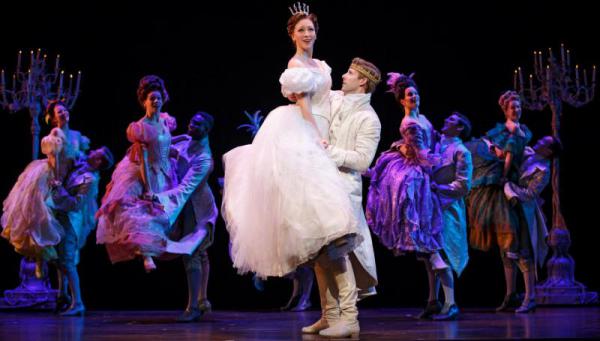 Rodgers & Hammerstein's Cinderella is at Proctors in Schenectady through Sunday, January 24, 2016. The show runs 140 minutes including a 20-minute intermission. Tickets cost $20 to $80 and are available online.