Review of "Newsies" at Proctors | Kids Out and About Albany

Review of "Newsies" at Proctors

Winner of two 2012 Tony Awards® and based on actual events and the 1992 movie of the same name, "Newsies" is the action-packed, exuberant story of kids who made history. It's playing at Proctors through Friday, October 17th.

While the musical is based on the historic 1899 newsboys' strike against Joseph Pulitzer and William Randolph Hearst, the main story revolves around the fictional Jack Kelly, a homeless 17-year-old boy whose survival depends on selling papers while he  paints in his spare time and dreams of moving west to Santa Fe. Jack, his friend Crutchie, newbies Davey and his little brother Les, and a whole ragtag crew of other newsies, rally together when they learn that the papers that they've always bought at 2 for a penny will now cost 60 cents for 100 papers.

For children to follow the story more easily, you might want to offer up a little historical context. Here's the super-brief summary I offered my 10-year-old: More than a hundred years ago, poor children would often have to work instead of going to school. Newsboys would buy papers from the newspaper company, then they would resell them and keep the profits. But profits were small--maybe 30 cents a day--and if the boys didn't sell all of their papers, they could actually lose money, so it was a gamble, and a tough way to make a living.

Knowing this much, kids will be able to follow along with the story, and older students of history might enjoy picking out the historical characters (Joseph Pulitzer and Teddy Roosevelt, who is governor at the time) and other references (at one point someone's trying to dissuade Jack from moving, saying "Even Horace Greeley came back to New York"). 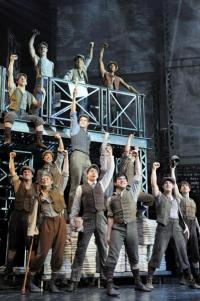 The cast is extraordinarily appealing. Jack Kelly, played by Dan DeLuca, is a terrific hero, sticking up for his friends and the new kids and confronting a bully with the comically wholesome line, "That's not nice!" While it would be easy to get lost in a crowd of leaping, singing, cap-wearing newsies, the production's actors, with help from props and choreography, do an excellent job of differentiating themselves, making the ensemble a group of specific individuals in a way that's uncommon for a big production like this. The reporter Katherine, played by Stephanie Styles, is Jack's love interest, but she has ambitions of her own, and her character balances the historic context and our modern sensibilities well. The actress Medda Larkin, played by Angela Grovey, contributes a terrific song, "That's Rich," while helping with the gender imbalance (although you'll find a female among the newsies if you're looking). Kids are likely to love seeing Les, an actual kid playing the role of a kid. At our production we saw the excellent Anthony Rosenthal; at other productions you might see Vincent Crocilla.

The choreography is awesome--leaping, boisterous, and joyful. The cast's dancing is terrific, with great acrobatics, and wonderful movement around the stage and the set. In the second act, they turn in up a notch with some tap dancing and throwing the "papes" to each other. The music and lyrics are excellent, too, making the whole production energetic and fun to watch. There are several big production numbers with tons of actors dancing and singing their hearts out. The various songs tend to get a little similar, so there's not a great deal of range, but it's certainly all fun.

My daughter and I love-love-loved Katherine's song, "Watch What Happens." I think she liked having the focus on a girl for 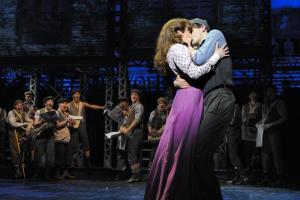 a change, but I was overwhelmed by the writing and how Jack Feldman managed to pack in Katherine's insecurity and confidence as a reporter, her hopes and fears about the events unfolding and her role in it, and her complicated feelings for Jack, all in one catchy song. Brilliantly written and winningly sung by Styles, it was a high point for both of us.

The script is funny and the various goofy newsies are entertaining. When Les, the newest little newsie, puts on a sad face and is rewarded with a dime, he pipes up "This is so much better than school!" and kids throughout the theater guffawed. There were many other laugh-out-loud moments.

Which brings me to the audience. I've seen many shows at Proctors (it's a tough job, but someone's gotta do it!), and the audience at the Sunday afternoon performance was nuts. People loved it. They arrived excited (lining up outside the door to get into their assigned seats), they laughed and applauded loudly, and there were audible gasps at plot twists and other dramatic moments. This was one of those rare performances where the cast and audience really seemed to be fueling each other. There was a technical glitch during the first act, and they actually briefly stopped the performance to adjust what seemed to be a sound problem. When the show resumed a few minutes later, someone screamed out "We love Newsies!" and there were whoops and cheers.

Throughout the play, there's tons of talk about the young generation standing up for justice and sticking together against powerful forces. Jack and Katherine, in particular, wrestle with their fears and competing desires as they make choices about what to do next. So it's a great message about the power of individuals, and especially the power of young people, to make the world a better place.

So, if you have young kids, anything to worry about? Well, if you don't like any swearing, there's a bit of it sprinkled throughout the production (I counted one each of: bastards, screwed, asses, damn). There's a bit of mild innuendo at the theater, which will fly over little kids' heads. At the end of the first act, there's a scene in which many of the newsies are beaten and Crutchie is dragged away to be imprisoned, but since it's all depicted through choreography and without gore, it's unlikely to be upsetting for most kids. I think ages 8 and up will follow along and love the show, children younger than 8 might not be able to follow the plot, but the dancing will entertain them.

I was surprised to see several kids dressed up as newsies for the occasion. In fact, the Newsies cast has even produced a video on tips for dressing up as a newsie for Halloween. So that could be a fun activity for show day itself or for Halloween.

"Newsies" is entertaining with some great messages and some actual American history thrown in, making the show one that most families will love.

"Newsies" runs about 2 hours, 30 minutes with one intermission. Tickets run $20 to $85 and are available online.