Review of Matilda The Musical at Proctors

Matilda The Musical is at Proctors in Schenectady through Sunday, December 18, 2015. Should you take your family? Read on for KidsOutAndAbout.com's review. 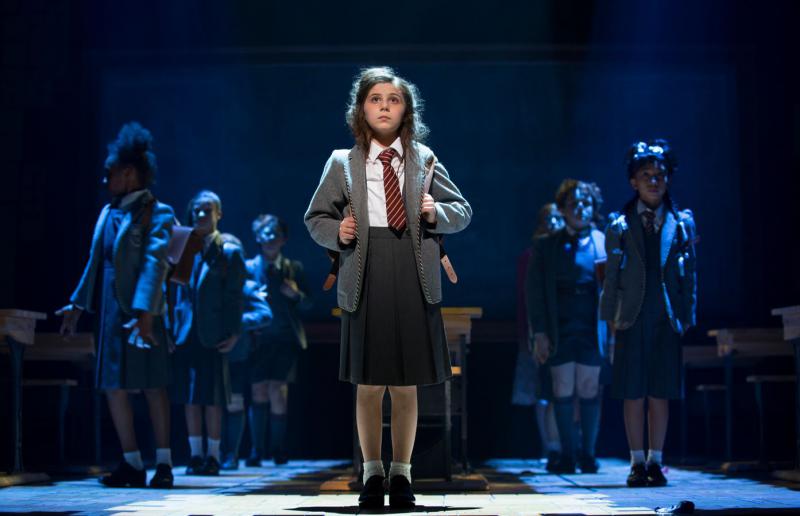 Based on the novel by Roald Dahl, Matilda is the story of a brilliant young girl who is raised by parents who are almost as mean as they are ignorant, then sent to a school led by a grotesque headmistress with a penchant for calling her students maggots. Through her troubles, Matilda seeks solace in books and stories and stands up for what is right with the help of her teacher, Miss Honey. If your family hasn't read the classic book or seen the 1996 movie, there's no need to worry, because the ushers hand out a terrific single-sheet summary that offers both major plot points and a glossary geared to children. This is particularly helpful because the dialogue and song lyrics are fast-paced, so reviewing it is a terrific way to spend your pre-show moments to familiarize kids with the plot (we also enjoyed playing "word search" before the show began; you'll see what I mean when you go). 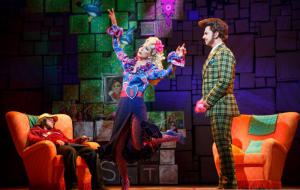 Three young actresses rotate in the starring role as Matilda Wormwood, and for Wednesday night's show, we saw Tori Feinstein, who sings beautifully and captures Matilda's bundle of contradictions—mischievious but wise, forlorn but hopeful—very well. Kids will enjoy seeing her and the whole band of young actors who make up much of the company. Jennifer Blood plays Miss Honey, Matilda's timid advocate. While her character never quite seems to have much spine compared to her precocious student, her performance, particularly in the song "My House," is lovely. But it is the nuttiness of Dahl's cartoonish adult characters that really steal the show. Cassie Silva plays Mrs. Wormwood, who is obsessed with ballroom dance and complains about Matilda that "it's not normal for a girl to be all thinking." She's got a particularly hilarious scene with her dancing partner, Rudolpho, played by Jaquez Andre Sims. Meanwhile Mr. Wormwood, played by Quinn Mattfeld, is a buffoon who raises the comedy level in every scene in which he appears. 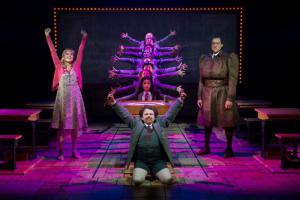 But the show-stealer is Bryce Ryness as Miss Trunchbull, a very manly-man wearing a skirt and equipped with an outlandishly large, low-slung bosom and a bun that makes her somehow look like an Eastern European Olympian back when they were all taking way too many steroids. For me, the effect was at first off-putting, and then, gradually more and more hilarious until there were moments during the show that I was trying to control my laughter so that it wasn't overly disruptive to nearby audience members, I'm even laughing about her as I write about this. Her character somehow goes from the ridiculous to the way-too-ridiculous and then ascends to a state that is mystically, sublimely ridiculous.

The choreography throughout "Matilda The Musical" is excellent, and my daughter and I were particularly huge fans of the dancing in "School Song," in which the older students of Crunchem Hall warn the new students while climbing all over the school gates. I also loved Rudolpho's outlandish-over-the-top poses and Matilda in fighting form. Throughout the show there are interludes in which Matilda is telling a story to the captivated librarian, Mrs. Phelps, played by Esther Antoine, and this can be a bit confusing to younger children. At some points while Matilda is telling the story, it's also being acted out by actors or showm as film clips. Letting kids know ahead of time that this will happen might make it easier for them to follow. At the beginning of our show the sound seemed to be slightly off-kilter, so for the opening ensemble piece, "Miracle," it was difficult to discern the lyrics. Luckily this issue was resolved as the production continued.

As you enter the theater, you'll notice cautions about strobe lights, flashing spotlights, and some loud noises, so be warned. As far as parent-specific warnings go, the language is all quite mild, although some parents might not like that the grown-ups say such mean things to the children, and there are multiple euphemisms for sex parts as Mr. Wormwood refuses to believe that his new baby is a girl and continues to hunt for his "thingy," his "franks and beans," and various other silly names. In the same scene, Mrs. Wormwood, fresh from childbirth, moans about her aching "undercarriage," which is a term that I'm totally going to find excuses to use from now on. There's also one massive burp joke and quite a bit of plot revolving around school being a terrible, terrible place. But it's all in good fun and is generally very, very clean compared to most theater I've seen lately. Beyond the content of the play itself, parents who will likely spend the intermission busily visting restrooms and purchasing treats will want to stay alert to shift back into spectator mode toward the end of intermission.  Mr. Wormwood comes to the stage in such an unassuming way that many theatre-goers were still trailing back in several minutes into the second act.

Themes to Talk About as a Family

What is particularly wonderful about this story is that its theme is so kid-focused and kid-empowering. In the lovely song "Natughty," Matilda's determined to stick up for herself and what is right. She says some amazingly profound stuff like "if you're little you can do a lot, You mustn't let a little thing like, 'little' stop you" and "nobody but me is gonna change my story." Those are powerful messages for your "littles." Matila is packed with anti-bullying themes and takes up the unpleasant truth that sometimes grown-ups are bullies, too, which is something worth talking about in your family. Parents of older children and teens might want to talk about gender issues, like Mr. Wormwood's refusal to recognize the daughter in front of him, the battleaxe villainous Mrs. Trunchbull vs. the meek and ultra-feminine Miss Honey vs. the girl-power heroine Matilda, and Mrs. Wormwood's idea of what being a girl is supposed to be about (at one point she says "make-up and hair-dye"). There's plenty to talk about, and even more if you consider the musical as compared to the book or movie.

This show is fun. It's goofy and outlandish while offering some moments of sincere sweetness as well. Even if younger kids have difficulty following smaller plot points, the main characters are amplified to such a ridiculous degree that it's easy for even youngsters to "get" what's going on, and the sheer number of children in the cast will keep even younger kids interested. Grown-ups will appreciate the humor, the sweetness of childhood notions of adulthood in songs like "When I Grow Up," and the core of faith that right will prevail. 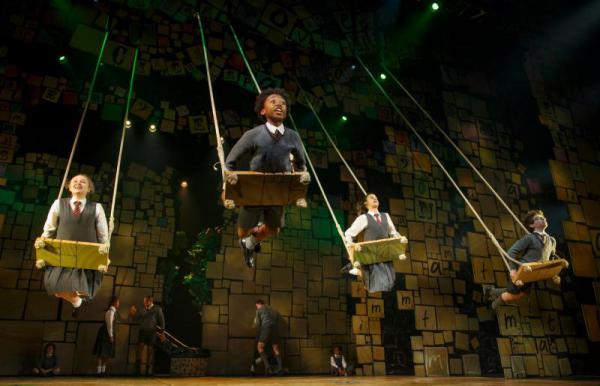 Matilda The Musical is at Proctors in Schenectady through Sunday, December 18, 2015. The show runs 2-and-a-half hours, with a 15-minute intermission. Tickets cost $20 to $90 and are available online.