Review of Mary Poppins | Kids Out and About Albany

Mary Poppins, a musical-turned-hit on Broadway and in London already, is touring the U.S, in 2012-2013. A Disney production like the classic 1964 movie, this stage version includes new songs as well as elements from the movie and PL Travers' 1930s Mary Poppins books. 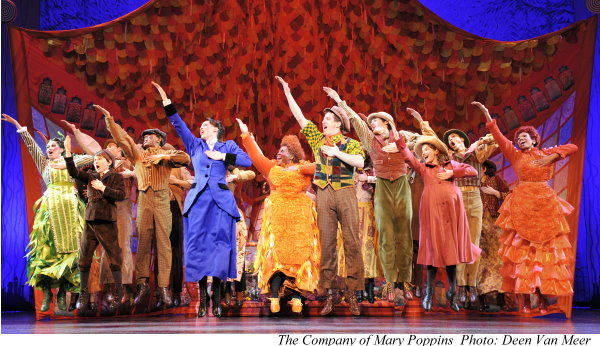 In short: Mary Poppins is terrific. The scenery and costumes are gorgeous, the voices soar, and the music and choreography offer the wonderful and rousing scenes that you hope for when you invest in taking your kids to a musical.

My daughters (age 7 and 9) and I loved the settings, especially the Banks' house on Cherry Tree Lane, which opens like a pop-up book at the start of the show and resembles a giant dollhouse. The house, along with the storybook-perfect Victorian costumes, are visually appealing reminders that Mary Poppins was a book before it was the movie we know so well. That movie looms large in our household, and I was skeptical that the stage production would be able to "pull off" the imagery. But I was pleasantly surprised with the creative responses to that challenge.

Young Jane (Julianna Rigoglioso) and Michael Banks (Eli Tokash) bring the show to life with much richer characters than in the movie version. They are cheeky, naughty, and fun throughout the musical. These roles are each shared between two actors, and for our show, both were superb.

Note: The show played in Rochester, NY, the week after we saw it in Schnectady. My colleague, June Santini, saw it there and reports that the other child actors, Madison Mullahey and Zachary Machiewicz, performed. She says,"The children were absolutely charming! Their performances were superb and added such warmth and fun to the show!"

I know it's sacrilege to say it, but I just might like Madeline Trumble's Poppins better than Julie Andrews'. Her vocal performance is superb, and I loved the little poses she'd effect, in light-hearted acknowledgement--because there's no way to avoid it--that she is an icon as well as a character.

Con O'Shea-Creal as Bert is appealing, and his character also serves to help tell the story and set the stage for the audience. We were also huge fans of the rest of the entertaining domestic staff.

The Audience: Is this show a good fit for my family?

Mary Poppins is appropriate and likely to be enjoyed by all ages.

Perhaps in an attempt to balance the child-friendliness with sophisticated storylines, the musical shows us more about the characters of Mr. & Mrs. Banks and their relationship than does the movie. This is dreary and unnecessary, with the exception of a new character, Mr. Banks' evil childhood nanny, who provides a villain for everyone to cheer against.

In one new song, "Playing the Game," Jane and Michael's neglected toys come to life, and it's downright creepy and nightmare-inducing, although it is likely to be forgotten amid all the fun except by the most sensitive children.

For very young children or those completely unfamiliar with the story, I'd suggest explaining the very basics of the plot ahead of time, because most of the early dialogue is sung, making it a bit challenging for kids new to musicals.

If your child is particularly attached to an earlier version of Poppins, explain that the story will be different. My warning did not adequately emotionally prepare my 8-year-old, who repeatedly nudged me, raising her eyebrows at the liberties that were taken with "her" story. For older kids, you might ask them to notice who is telling the story and whether the characters act as if they know that the audience is watching them so that you can do a bit of literary analysis on the drive home.

My family missed a movie favorite, "Sister Suffragette." Yes, I know they were poking fun at a woman who is too distracted with worldly concerns to care for her children properly. But I love that Mrs. Banks. In contrast, the Mary Poppins musical character is a melancholy and earnest woman who can't even manage to plan a tea, and if we're thrown a feminist bone near the end of the show, it's too little, too late.

Luckily, there are plenty of songs to compensate, and a couple of the gorgeous and lavish numbers left folks in my audience literally cheering. I was skeptical that non-animation could do "Jolly Holiday" justice, but the park bursts into technicolor and will give your children a new appreciation for statuary with magical effects.

"Supercalifragilisticexpialidocious" offers super-fast singing and dancing that seem almost impossible even as you are watching. The sweeps convincingly frolic on the rooftops of London in "Step in Time," another scene in which, between the dancing and the set design, it is difficult to choose what to watch. One new song, "Anything Can Happen," is so lovely and catchy that I couldn't stop singing it in the car on the way home, much to my 10-year-old's dismay.

My kids and I adored Jane and Michael Banks. And as for the nanny herself, from unpacking her carpet bag until she floats away, Mary is magical.

Mary Poppins is playing at Proctors in Schenectady Tuesday, October 2 through Sunday, October 7, 2012.

It will be at the Auditorium Theater in Rochester from Tuesday, October 9 through Sunday, October 14, 2012.

Running time is 2 hours, 45 minutes including one intermission.

Katie Beltramo, a mother of two, writes at www.capitaldistrictfun.com. When her daughters aren’t attending musicals, they’re organizing their own extravagant, costume-laden productions.