Review of Disney's The Lion King at Proctors

Disney's The Lion King is at Proctors in Schenectady through Sunday, April 17, 2016. Should you take your family? Read on for KidsOutAndAbout.com's review. 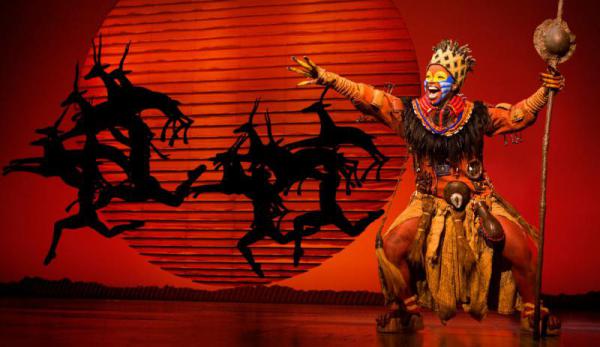 Most of us are familiar with the 1994 Disney animated film The Lion King, and because this show is so action-packed and filled with people who portray a variety of animals and plants in conveying the story, knowing the plot ahead of time is helpful, especially for little ones. For those who somehow missed this cultural touchstone, it's the story of the lion cub Simba, heir to his father Mufasa's kingdom. After a tragedy involving Simba's evil and bitter Uncle Scar, Simba runs away from his homeland and only returns at the urging of his childhood friend, Nala, to whom he is betrothed. Along the way, there is spiritual guidance from a compelling baboon named Rafiki and comic relief from Zazu, the hornbill/royal majordomo as well as a meerkat and a warthog whose "Hakuna Matata" philosophy becomes the story's catchiest song. 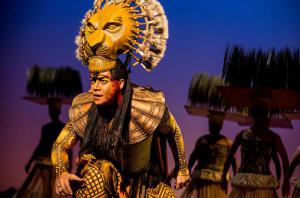 The musical begins with what has to be one of the all-time best opening numbers ever as a menagerie of animals gather together on the stage. The music is stirring and the characters themselves are created from elaborate puppetry that was a revelation when it first opened on Broadway in 1997 and is, to this day, still pretty amazing. With drummers in the balcony on each of side of the stage and actors singing up and down the aisles, The Lion King immerses the audience in its fantasy version of Africa, and it's wonderful.

Throughout the story, members of the ensemble act as birds, elephants, blades of grass, and all sorts of other natural elements. The scenery itself is relatively simple, in large part because the costuming is so elaborate and because, frequently, the actors themselves serve as scenery.  Packed with visual splendor, there's plenty to watch and engage little ones.

The choreography supports these portrayals as well, like grasslike skirts that they'd sway to mimic an undulating field of grass, and even the actors' smallest movements or style of walking is calculated to complete the portrayal of a particular animal, for example, beyond whatever puppetry or costuming is used. Another favorite among the dancing was the hyenas dancing while Scar is triumphant.

Many will remember some of the most famous songs from the musical, including "Circle of Life" and "Can You Feel the Love Tonight," but my favorite music was some of the call-and-response vocals that we think of. as traditionally African.

The Cast of Characters 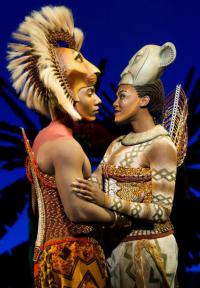 Children love to see kids live on stage, so they'll be excited to see that for the entire first act, Simba and Nala are cubs like them. For our performance, they were played by BJ Covington and Savanna Fleisher, respectively, and both were engaging and fun to watch (and Savanna is only 9 years old!). We liked the grown-up versions of Simba and Nala as well, played by Aaron Nelson and Nia Holloway. We especially liked how Nala blended in with the lovely ensemble of lionesses. Timon the meerkat, played by Nick Cordileone and Pumbaa the warthog, played by Ben Lipitz, bring as much goofiness and fun to the musical as the animated characters do the movie, and a certain segment of the kid population will particularly love the fart jokes. Scar is so hateful as the villain that during the bows at the end, a good third of the audience booed him, still angry at him for all of his evil schemes. My favorite character and actor, hands down, was Mukelisiwe Goba as the baboon shaman Rafiki. Her voice is incredible and she has a phenomenal presence that really makes her seem like a spiritual leader, and yet she also offers up some comedy, too, like when she's swinging on a vine in a jungle.

Who Will Love The Lion King?

This show is family friendly, with no inappropriate language and very little innuendo. There are some jokes geared for the grown-ups, and the beautiful music and sophisticated and imaginative puppetry will delight all ages. The whole show is visually engaging and will keep the easily bored interested, That said, it could be too overstimulating for some children, with flashing strobelights on a couple of occasions and music and people coming from all directions. There are also some scary parts. Scar lures young Simba and Nala to a graveyard with hungry hyenas and later murders someone. If you're concerned that your child would be too scared, let them watch the movie first. The plot follows it fairly closely, so you'll get a good idea of when you might need to offer some hand-holding ahead of time.

On multiple occasions members of the cast walk through the audience, and if you're hoping for some close encounters, your best best is to get seats along the two center aisles. You'll also want to be seated early for the beginning of both acts, because the action starts quickly. Merchandise includes small plushies of the major characters for $20-$25 along with plenty of the signature yellow-and-black lion logo.

The Lion King is a visually stunning and artistic version of a familiar story, which makes it a great choice for exposing kids to something that's different-but-in-a-good-way. The music and lyrics are terrific, and there's plenty of fun to balance out the scary parts.

Disney's The Lion King is at Proctors in Schenectady through Sunday, April 17, 2016. The show runs 130 minutes plus an 18-minute intermission. Tickets cost $20 to $70 and are available online.