Review of Billy Elliot The Musical | Kids Out and About Albany

Review of Billy Elliot The Musical

Billy Elliot The Musical (playing through Sunday, June 9th at Proctors) centers around a pre-teen boy, with plenty of kids in the cast. It is a highly engaging, entertaining show, but is it right for your kids? Well, that depends on you and your kids. 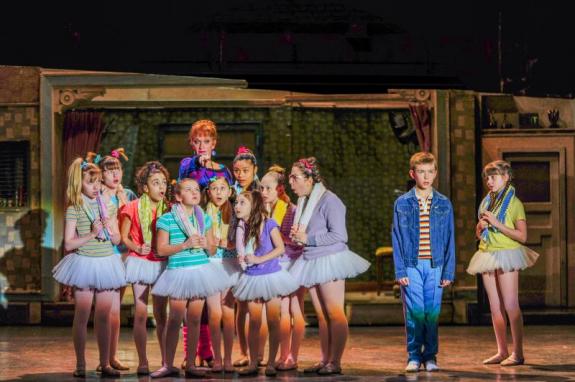 Set in a coal-town in Northern England in 1984, Billy Elliott tells the story of an 11-year-old boy and family who struggle to deal with the threatened closure of the coal mines. Riot police, internal union struggles, and the loss of the family’s livelihood are the backdrop for Billy's discovery that he loves ballet. (Pronounced “bally” in Northern England.) While his family struggles with whether to support his dream of auditioning for the Royal Ballet School (they think that he should be boxing), Billy has to decide whether to pursue his dreams or stay in his dying town. 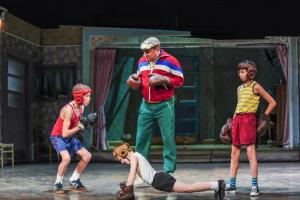 Children younger than 10 may have a hard time absorbing all of the historical background and the characters' English accents. But they will no doubt be entranced by the marvelous dancing. There are plenty of upbeat, up-tempo numbers to draw kids into the show. The cast is full of funny kids and funny adults, and of course, everyone can dance.

There are three factors that parents should know about before they decide whether or not to take their children:

1) There is plenty profanity throughout the production. The characters are working-class Brits, and when they're not telling someone to P*&$ off, it's likely because they're saying to F$%@ off instead. My daughter learned at least one new word, and I'm hoping she'll forget some of the less-common British slang she encountered.

2) Although there's no overt sexual activity, homosexuality is a theme throughout the story. Billy and his family struggle with the notion that boys who like ballet must be "poofs," and Billy's friend Michael likes to dress in women's clothing and seems to have a crush on Billy. This leads to some hilarious and colorful song and dance sequences, including some of the most creative use of wardrobe props I've seen. And the musical communicates all sorts of messages that most parents would support: be true to yourself, don't believe every stereotype, and treat others with kindness. Billy and Michael's friendship is one of sweet subplots throughout the show.

3) Billy and his family are still reeling from the death of his mother. Billy's mother actually appears in the production, spotlighted to indicate that she's a spiritual rather than a corporeal presence. One song was so moving that my 8-year-old and I were literally clinging to each other, tears rolling down our cheeks. If you have a sensitive soul who frets about death, you might want to avoid it. On the other hand, there's quite an appreciation for moms!

The young actor whom we saw portray Billy (Drew Minard for our performance, Noah Parets and Mitchell Tobin will also take turns here in Schenectady) was unbelievable, and the young cast were awesome. The ballet girls' start with comically awkward performances that at first belie their talent, but eventually they're allowed to shine. Billy sings, dances, spins, and seems to fly and conveys all sorts of emotion through movement. Dance-loving kids and adults will be mesmerized. It is a rare thing to see children so young with this much talent.

The characters are so well-rounded that it's easy to feel a connection to many of the people around Billy. His grandmother's "We'd Go Dancing" is funny and poignant, and both Billy Dad and his teacher are rough around the edges but ultimately completely lovable. There's also plenty of physical comedy and laughs along the way. 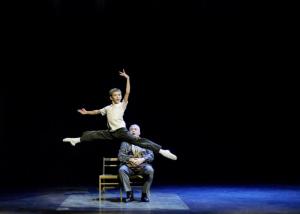 Because of its setting in the early-80s miners' strike in Northern England, kids might have a bit of trouble following the plot. If you want to prepare them to make it easier to follow, make sure that they know:

So, should you go see it? If you can get past the language, you'll love it. The story made us laugh, cry, and laugh some more, and the performances were amazing.