KidsOutAndAbout.com review of Ringling Bros. and Barnum & Bailey Circus FULLY CHARGED! | Kids Out and About Albany

The show began early for us as we approached the Times Union Center from the back and walked through a wave of popcorn smell, mixed with fresh hay and just a touch of manure. It put us right in the mood. In fact, I think that there might have been a bit of squealing.

Do your best to get to the circus early. If you lollygag through the entrance area, you and your children are likely to find tons of delicious treats and souvenirs which you had no idea that you needed desperately until you saw them. For example, they have fake lions and elephants that your children can perch on in front of a green screen for an adorable I'm-part-of-a-circus picture for $20. There's no way we could have passed that up if we'd had Grandma with us. So here's another tip: bring Grandma with you!

As it was, with just their cheap mom and dad around, the girls headed straight for the free-with-your-ticket fun of the Circus Pre-Show. An hour before show time, kids and adults alike can join the performers right down in the ring, and this Circus Pre-Show ends about 20 minutes before show time so that they can set up for the main event. Jugglers, an aerialist, and clowns performed and posed with kids. One performer spun multiple hula hoops, then passed around hoops for the kids to try. People applied free circus tattoos for kids while others offered up clown clothes for dress-up. I was surprised, last night, by just how un-crowded this pre-show was. You should absolutely plan to go, and then use that 20-minute set-up time for a last visit to the bathroom. 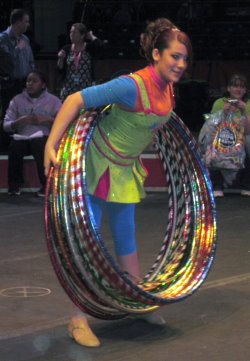 Throughout the show, the clowns seemed more entertaining than usual, with clever pop culture references and, of course, goofy props. The Clown Alley crowd was supplemented by headliners Vas and Stas and the Alimgulov Troupe, who rode a bike with enormous donut tires. gaggle of dancers looked a bit like how you would expect Kate Middleton to look if she dressed like a clown: jaunty little hats, mini-veils, and boots like something from a period BBC drama, except in splashy crayon colors.

Animal acts consisted of horses, including miniatures and a white horse who basically walked off the stage on its hind legs; tigers, which for me is an act where I'm always rooting for the animals over the trainer, and of course the elephants.

The grand crescendo was Brian Miser, who shot out of a cannon while on fire. My favorite act was the highwire Danguir Troupe. We happened to be seated close to them, and in addition to impressing us with their death-defying feats, stacking on top of each other stories over our heads, they were full of personality. The troupe leader was thrilled and excited for each upcoming stunt while the rest of the group looked just nervous enough to scare us all to death. My daughter and I were clutching each other while a young man sucking down a beer behind us deadpanned, "Shut up. This is crazy." as the act unfolded. Another hit for us was the Fernandez Brothers and their Wheels of Steel, which led a mom I spoke with to conclude, "Now that's why kids want to run away to the circus." We also loved the Tianyicheng Troupe, who performed crazy tumbling from bounce stilts. And my gymnast daughter was thrilled to see the Negrey Troupe doing gymnastics turned up a notch on a giant tumble track, even if we all agreed that the lady's dress was utterly impractical for the task. 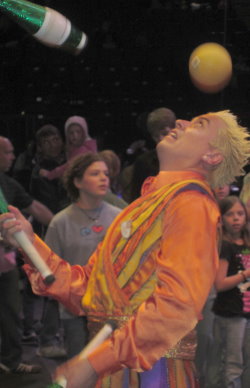 There were strong men and aerialists aplenty, although we were disappointed that there was no trapeze act. This circus seemed stronger with the clowning between acts and just a bit less entertaining with the big numbers for the opening, the cannon act, and the finale. Still, it was fun for all and when we ran into a friend who'd taken her teens to the circus for the first time, she agreed that it was "the greatest show on earth!"

The show runs about 2 1/2 hours with an intermission, and show times are staggered, which is great if you're working around a nap schedule. They are:

Don't forget to plan to get there an hour to an hour and a half ahead to enjoy the pre-show!

© 2012, Katie Beltramo Katie Beltramo, a mother of two, is Editor of Kids Out and About-Albany and blogs at Capital District Fun.