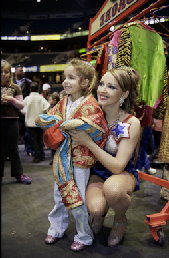 We went to the Ringling Bros. and Barnum & Bailey Circus last night. An excellent time was had by all.

The Circus Pre-Show: Free with your ticket!

An hour before show time, kids and adults alike can join the performers right down in the ring and learn new circus skills. So get to the Circus early: as close to one hour ahead as possible.

By the time we were in the arena at 6:25 pm or so, there were lots of people on the floor, but there was still plenty of fun to be had. What I hadn't realized is that the pre-show is pretty much over about 20 minutes before showtime, because they need to clear the floor and set up.

The pre-show was busy, but not a complete mob scene.

I thought that it was a great idea to have circus clothes for kids to try on. My children decided that they were too sophisticated for that. There was a juggler surrounded by vast numbers of people, but we managed to get close to the very fun ring that included some dancing, followed by acrobats and an elephant.

The ring was surrounded by a rope as well as a little cushioned wall for people to sit on, and one thing I really liked was that the crowd was great about sort of shuttling the children forward so that they could see. It was a bunch of people who had come for their kids, and so around me, everyone was polite, friendly, and kind.

My go-to-the-bathroom-at-the-end-of-the-pre-show strategy worked great: no lines. Of course, my children were completely freaking out that they might miss the start of the show, even though we were back in our seats with 5 minutes to spare. Clowns had been performing the whole time, so they felt like they'd missed out, but it was nothing compared to the hoopla that followed.

The circus opened with a crazy train that included performers, puppetry, mermaids, and tricked-out Segways, and it was so overwhelming and motion-filled that I briefly feared that M would get sick. Nope, not at all. Both kids were entranced.

Prior to the circus, Debra Ross, KidsOutAbout.com's publisher, had gushed about the unbearable hotness of ringmaster Johnathan Lee Iverson. Repeatedly. Apparently he charmed her in an interview on one of their earlier tours. So in the midst of the hoopla I was also checking for my own personal hotness report. From up in the stands, I'd have to say that he was upstaged almost immediately by the men of the trio Ulaanbaatar Ballerina. In Johnathan's defense, I must point out that it's much easier to communicate hotness at long distances when you're shirtless and in spandex. I have three or four jokes now that I've considered and rejected because they're simply inappropriate when reviewing a family show.

Ahem! Where was I? Oh, right. We wished that there had been a dog act. That was J's favorite last time. There was an assortment of other animals, but they just didn't thrill us as much as a small dog hopping around in a tutu. During the tiger act, you could almost catch the tigers rolling their eyes and muttering under their breaths resentfully. The saving grace was when two tigers began nuzzling each other while waiting for their turn to do tricks. That charmed us all.

The humans offered a variety of unbelievably fabulous stunts. Of course, with so many, folks tend to lose all perspective. I mean, seriously, where else can you watch someone walk over flaming broken glass and there's barely a peep out of the audience? Or you see a guy do flips on stilts? I thought that it was interesting that the biggest applause always accompanied mistakes or failed attempts at something. Cute W thought people were trying to be polite and encouraging, but I argued that it was because we forget how hard it is to do all of this stuff, and the mistakes remind us.

We loved it when the motorcycling Torres family came out and took off their helmets, and one closest to us shook out her long girl-hair. We love-love-loved the Barnum Bouncers. 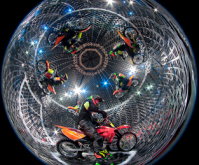 We have new revised wished-for jobs for our family: M would like to do the trapeze like The Flying Caceres, while J would like to divide her time, working both as a Barnum Bouncer and as the woman who rides under Alex Petrov. We agreed that the Body Benders had a tough job, J pointing out that "they poke holes to breathe because if they didn't then they would be dead." (Click the link and see the 8th photo to see what she means).

There were plenty of souvenirs and food treats, and I tried to keep track of some prices just so you'd be emotionally prepared.  Many snacks were combined with a memento, so you'll drop $10 for a snow cone in a plastic clown mug or $12 for three big puffs of cotton candy and a yellow hat that looks like it should come with a curious monkey. There are those ungodly spinning light-up things that only people who are insane or grandparents would consider purchasing. The grandpa behind us bought one for his toddler granddaughter, and he handed the vendor a $20. "Two more" was the answer. He coughed up the singles, then joked to me that he'd been expecting a ten back. No such luck. However, it was possible to eat for not too much money. There were caramel apples for $4 and a crazy s'more-on-a-stick item that J chose for $5. 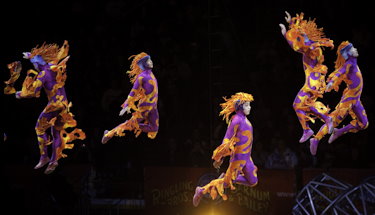 Okay, back to more logistics. It's a mob scene. Avoid leaving the arena area during intermission if it's possible. Seriously. It's crazytown. If you remember where the bathrooms and exits are, you'll probably have better luck moving around the seating area. The show itself ran just over 2 hours. By the end every child in the place was completely exhausted and overwhelmed. If you've been planning to stop for groceries after the show, change the plan. Seriously.

Anyway, we had a wonderful time. My friend, who'd never been to a circus before (!), loved it and said she'd officially recommend it to any circus first-timers.  I hope that my ticket-winning readers went and had a good time.

Want to go? For tickets, here’s the link.

Barnum 200: Barnum's FUNundrum is at the Times Union Center in Albany from May 5-8, 2011. Click here for tickets and show times.