Before we even got out of the car, my teenager announced that this was the place he was going to get married.  About an hour later he announced that he wanted to have his birthday party here.  Lunch wasn’t even over before he announced that he had texted a bunch of his friends and made plans to come back with them.  And that was just the teenager.  My 5 and 8 year olds were chirping incessantly about every new and wonderful thing they saw, all the great ideas they had for sleepovers, parties, bringing relatives back, school trips – honestly, I couldn’t keep up with their dueling streams of consciousness.

Our morning at Hidden Valley Animal Adventure was clearly a success. 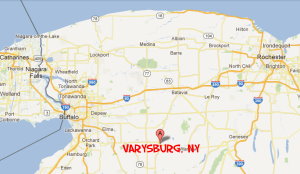 We wanted to experience the entire adventure, so the first thing we did was climb aboard the tractor-pulled open-air trolley which took us into the gigantic fenced-in enclosure (it reminded me of the ones in “Jurassic Park”).And by gigantic, I mean that it is spacious enough to contain two miles of trails for the trolley to travel on and various herds of animals.

Every passenger was given a large plastic cup of feed and as we rode towards the enclosure, our guide gave us a bit of background information and advice about getting the most out of the tour while ensuring the safety of ourselves and the animals.  FYI - she wasn’t kidding about holding on to the cups with both hands!

We hadn’t traveled far before a small herd of elk surrounded the trolley in search of treats.  Hidden Valley ensures that visitors have a very interactive experience with the animals by understanding that “if you feed them, they will come” – to paraphrase the famous Field of Dreams line.

I confess that when the elk approached us, I was initially terrified.  Terrified enough to grab my smallest child and pull her toward the center of the trolley.  You see, animals in real life are bigger than they are on television and in books.And sometimes, their antlers are bigger than your smallest child. Oh, and they have teeth too! Of course, after I noticed that the elk hadn’t dragged any of the other passengers off the trolley, I began to relax.Eventually, I realized that all the animals are vegetarians, which allowed me to let my hair down and give my 5 year-old her feed-filled cup to use.

In addition to the elk, we had encounters with bison, deer, sheep, zebras, Galloway cattle, goats, Texas longhorns, yak, alpaca and llamas, water buffalo, reindeer, and my kids’ favorite, ostriches.The female ostriches were a bit uninterested in our trolley, but the male (named Oscar) was delightful. 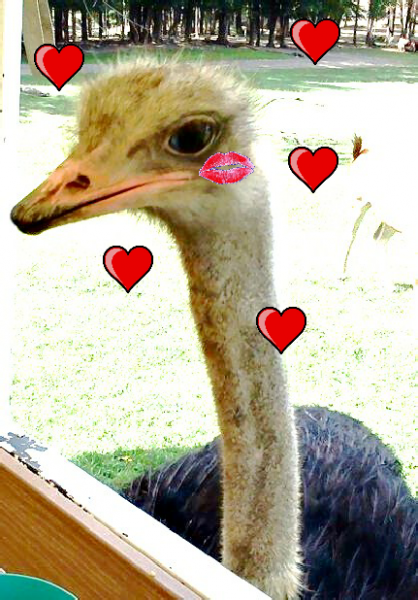 He was hanging out near the longhorns but remained apart when our trolley approached.

The longhorns were very happy to see us, but Oscar stood completely still and just stared at us imperiously.  He waited for the trolley to move over to him and then Oscar reigned supreme.  He walked closer with a slow, dignified gait and hissed at the longhorns to show them who was boss.  He carefully selected one of the cups of feed extended out to him – my son’s – stared stonily for a moment, and then made a quick series of very un-dignified dive bombing maneuvers into the cup.

My son and his neighbors were showered by a hail of animal feed, and we wondered if Oscar managed to actually capture any of the little bits of corn and seeds during his raid.  He then peered around to check on his personal space and was not happy with what he saw.  Oscar puffed out all of his feathers and extended his wings while hissing and flapping at the longhorns who had dared get a little too close to his royal highness.  It was hysterical – the longhorns were practically rolling their eyes at Oscar. and none of us could stop laughing.

I don’t know exactly how long the tour was, because the time flew by and I wish we could have had a longer turn.  In reality, it was long enough so that we were all starving when we climbed down from the trolley.  After a thorough wash-up, we had a great and reasonably priced lunch in the Trailside Café.  I am not an experimental eater so I stuck with the familiar, my daughters ate off the kids menu (hot dogs and grilled cheese) and my son ordered nachos.  There were more exotic items available including bison and elk burgers.  Once the re-fueling was complete we headed out to visit the petting zoo. 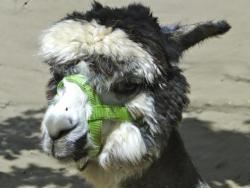 For $2, each visitor receives a souvenir cup filled with feed. Then you enter another enclosure filled with the softest, cutest, and most adorable animals. There were tiny donkeys, miniature horses, goats, the softest and sweetest little alpacas ever, and a tiny ram-like animal which was very friendly.

The animals were neither shy nor intimidating, which helped me feel comfortable about letting my kids wander off in their own directions.Adding to the entertainment was the fact that it was mating season in small-donkey land.It wasn’t graphic or disturbing, just funny.  My daughters laughed so hard they couldn’t breathe and had tears streaming down their faces as a male donkey tried to “hug” the female donkey who was clearly not impressed with his approach.She brayed and kicked out at him while throwing “can you believe this guy?” looks at the visitors.These two and a couple of miniature horses (who weren’t paying any attention to each other) were in a separate, much smaller enclosure so that the visitors could still pet and feed them, but not be able to walk amongst them.

The feed was gone and the kids were beginning to droop, so we left the petting zoo and strolled over to another enclosure which had a pregnant camel, pigs and a rabbit which was bigger and faster than the pigs.  It was surreal to watch this monumental bunny cavorting around with the pigs.  Sweaty and tired we climbed back into the car and headed down the gravel drive.  Before we had even reached the end of it, my five year old asked in the voice which alerts everyone that she is about to fall asleep (so don’t poke this tired, volatile monkey) and asked, “Tomorrow can we bring Daddy here?”

Helena Robin ...is President and CEO of the Robin family. She coordinates and executes all family operations including (but not limited to) communications, transportation, management, catering, maintenance, troubleshooting, and cultural development. Her Executive Team is composed of a Husband/Creator of Chaos and three unpaid interns.