Exhibit Review of Titanic: 12,450 Feet Below at Mystic Aquarium, Mystic, CT | Kids Out and About Albany

The glowing iceberg looms large and cold to the touch. Stars twinkle in a moonless sky above. A mournful boat horn sounds and waves lap against the side of the ship.

The scene inside Mystic Aquarium’s new exhibit, Titanic – 12,450 Feet Below is set just as it was 100 years ago as the Titanic made her maiden voyage across the Atlantic. A century after she struck the berg and sank, we continue to be drawn to the story, mesmerized by the drama of the rich and the ordinary caught in this seemingly timeless tragedy. 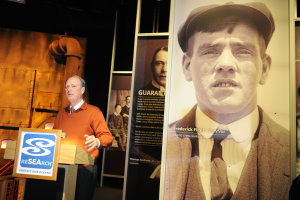 Perhaps none has been more obsessed than Robert Ballard, the genius explorer who found Titanic’s remains on the ocean floor back in 1985. Ballard, pictured to the right, is the president of Sea Research Foundation, which operates Mystic Aquarium; he collaborated with former Walt Disney Imagineer Tim Delaney to create this unique exhibit timed to coincide with the 100th anniversary of the disaster.

The exhibit engages multiple senses, with towering replicas of the barnacle-covered hull to touch, videos to watch, and an audio track that evokes that icy ocean night. It is also aimed at getting kids excited about ocean exploration. “The deep seas is the largest museum in the world,” says Ballard. “There is more history than in any museum.”

One highlight is a short, but powerful, video of Ballard talking about “The Moment,” when his crew first saw the remains of the Titanic after 73 years under the sea. He describes how his ship zig-zagged across the ocean floor, looking for the debris field. Then they show actual film of the moment the crew saw one of Titanic’s 29 boilers. Excitement exploded on the ship.

Then, Ballard remembers more somberly, one of the crew looked at the clock and said “she sinks in 20 minutes.” It was then 2 am and the mighty ship sank at 2:20 am 73 years earlier. Suddenly the glee seemed misplaced and the crew returned to work mindful of the hundreds of people who died in those waters. 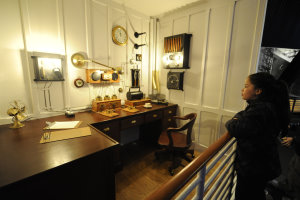 Is this exhibit really for kids? Yes, with a couple of caveats.

By virtue of the topic, the exhibit might be too intense for some sensitive kids. The lighting is dim, echoing the dark ocean floor. And the exhibits are explicit: one portion includes giant photos of both victims and survivors. One photo shows a family of eight, including an infant. The wrenching caption says simply: “The Goodwin Family – all perished.” Perhaps the most poignant part of the entire exhibit is a replica of the victim’s shoes that Ballard’s expedition saw scattered on the ocean floor. Today they are all that remain of those lost souls. 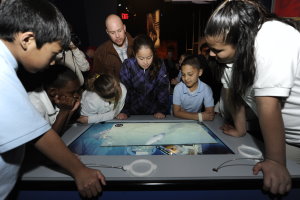 But the youngest children, those who won’t know the story, will be entertained pretending that they are in the ship’s engine room. This feature, located on a lower level in the middle of the exhibit, includes a “b-deck” with replica gauges on the wall, tubes to communicate with those on other decks, and metals wheels to practice steering. They can also touch the “artifacts” – all replicas because of Ballard’s firm commitment to leave the Titanic’s remains where the are on the floor of the Atlantic.

Older kids will enjoy the many digital elements woven through the exhibit. In the room with the iceberg, they can take quizzes on screen about iceberg facts and decode the Morse code messages that Titanic received warning of the ice field in the hours before her crash. In the main exhibit hall, they can click through archives of Ballard’s papers, simulate finding artifacts at the bottom of the ocean, and explore detailed floor plans for the giant ship. 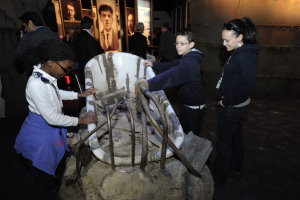 Making the trip to Mystic

Is Titanic – 12,450 Feet Below worth the drive from points in New England, Connecticut, or the New York City region? If you have any interest in Titanic, absolutely! My kids were in school today, so they couldn’t accompany me to the press preview event, but I will be back there with them first thing on Monday morning, when their spring break begins.

: Titanic – 12,450 Feet Below opens Thursday, April 12 at Mystic Aquarium, 55 Coogan Boulevard, Mystic, CT. It is open 9 am to 5 pm April through October, with more limited hours November through February. Admission is $29 for adults, $21 for children 3 through 17, and free for those 2 and under.