Beyond The Nest Reviews HEARTLAND at Geva Theatre Center

With Geva’s production of Gabriel Jason Dean’s new play, Heartland makes its world debut as part of a National New Play Network (NNPN) Rolling World Premiere. It is a beautiful and profound play that will challenge everything you think you know about the war in the Middle East, and particularly, Afghanistan. It will also stretch every emotional muscle in your body.

As the play opens, we join retired professor of Comparative Literature and Afghan Studies Harold Banks (Mark Cuddy) as he awaits the return of his adopted daughter, who is teaching in Afghanistan for six months. As he dictates a paper, comparing the writing in Hemingway’s The Old Man and the Sea to that of French-Afghan author Atiq Rehimini, Dr. Banks cites a quote from Hemingway, “It is the space between words where the ache lies.” Little do we realize how accurately that quote pertains not only to the written word, but also to the spoken word… the space where truths are left untold.

Enter Nazzrullah (Owais Ahmed), an Afghani refugee, who appears suddenly (and illegally) at the home of Dr. Banks with a copy of The Diary of Anne Frank and Dr. Banks’ copy of The Old Man and the Sea. He has been teaching in Afghanistan alongside Banks’ daughter Getee (Mari Vial-Golden) and has fallen in love with her.  When a Taliban bomb strikes the school, killing all inside, Naz--who survived because he was late that morning--makes it his mission to fulfill Getee’s urgent concern to go to her father, whom she suspected was ailing.

Mark Cuddy has built a reputation as a brilliant artistic director. To see his performance as the aging, ailing Dr. Banks is to see the other half of a meticulously-crafted coin. I feel great fortune to have seen him in this complex role, in his return to the stage after an 18-year absence.

As the devastating secret of Dr. Banks’ role in Afghanistan’s history is unveiled, first to Getee and then to Naz, the ache between words becomes guilt and shame for Dr. Banks, anger and a sense of betrayal for Getee and Naz.

As Getee, Mari Vial-Golden shines. Through a series of flashbacks, we see the young woman develop in confidence and maturity, as she grows in fluency in her birth language, in assurance that she is making a positive impact on her young students, and in love as she slowly falls for Naz. 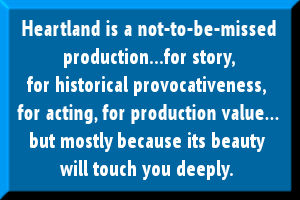 The interplay between Getee and Naz is a thing of beauty, as they struggle to learn each other’s language, trip over jokes in the other’s tongue, and are slowly drawn together by their shared passion for education, literature, their students, and chai tea.

As Nazzrulah, Owais Ahmed gives a superb performance. He infuses his character with humor, pride, and a great deal of poignancy as he and the ailing Dr. Banks stoically face the loss of Getee and Dr. Banks’ worsening health.

A play is a collaborative process, and often it’s hard to know the exact strengths the playwright, director, and actors bring to a production, because they are so intricately woven… but it’s always easy to see weak links. There are no weak links here.  Gabriel Jason Dean takes a disturbingly real historic event and weaves a tale that transcends borders and time. His skill is matched by director Pironne Yousefzadeh who brings great nuance to this beautiful play. As always, Geva’s creative team works their magic. Costumes by Dian El-Aziz and scenic design by Meredith Reis take us innovatively and seamlessly from schoolroom in Maiden Shar to family room in Omaha. With lighting by Seth Reiser and sound design by Pornchanok Kanchanabanca, the journey between places is complete.

Heartland is a not-to-be-missed production…for story, for historical provocativeness, for acting, for production value…but mostly because its beauty will touch you deeply.  You can see Heartland on Geva’s Fielding Stage between now and April 1.

Carol White Llewellyn is Editor of BeyondTheNest.com and the host and producer of Conversations with Creatives, a cable and online TV program that explores the arts and celebrates artists and their work.