THE GIBSON BROTHERS NORTH CHRISTMAS SHOW | Kids Out and About Albany 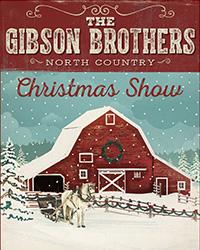 The Gibson Brothers’ brand of bluegrass is a visceral mix of heritage and soaring harmony, making them the premiere brother duet of the genre, following in the footsteps of legendary brother acts such as the Stanley Brothers, Jim & Jesse, and the Osborne Brothers. Their first-ever album of entirely original songs, In the Ground sees the Gibson Brothers taking on their own roots as the sixth generation of Gibsons to grow up on their family farm. The two-time International Bluegrass Music Association Entertainers of the Year follow up their stellar, 5-times nominated tribute to brother harmonies, Brotherhood, with this latest effort, which digs even deeper into their commitment to family and their history. With accolades including the International Bluegrass Music Association’s Entertainer of the Year; Song of the Year; Songwriter of the Year and Album of the Year–in some cases multiple times–the Gibson Brothers truly need no introduction in the bluegrass world. Yet even though they’re “bluegrass superstars” (New York Times), there are still plenty of people outside the worlds of bluegrass and acoustic music who are not yet familiar with their music. For them, In The Ground is the perfect record–just as it is for long-time Gibson Brothers fans, too.
Click here for more information about this activity
*Times, dates, and prices of any activity posted to our calendars are subject to change. Please be sure to click through directly to the organization’s website to verify.