First Night Saratoga 2019 | Kids Out and About Albany 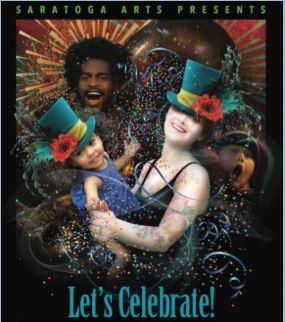 First Night Saratoga is one of the oldest and largest celebrations of its kind in the country. Now in its 23 year, First Night Saratoga, is a Saratoga Springs tradition. Every year, Saratoga Arts teams up with 30 partner venues, over 40 sponsors, 300+ artists, and 150 volunteers to present the largest New Year’s Eve celebration between New York City and Montreal. First Night Saratoga has something for everybody – music in all genres, magic, mind arts, and more!
Click here for more information about this activity

We have done our best to group complementary artists together, and so it will be possible to choose one or two venues that will provide ample entertainment throughout the night.  If you find yourself with a good seat early on, be assured that you may keep your place as long as you like We have included some highlights below, but we encourage you to review the schedule with friends and family and choose your own exciting New Years Eve adventure!

On the mainstage in the City Center, regional rising star, Sydney Worthley will get you dancing at the top of the night with her soulful voice and upbeat original numbers.   Next up, the popular Professor Louie & the Crowmatix will take the stage with the Woodstock Horns to present the lost tracks of The Band.  Back by popular demand, Sawyer Fredericks, will close out the last two hours of 2018 with his own brand of American roots straight from his new album. Fredericks will also lead a countdown into the New Year, as will all closing artists in the City Center (Georgie Wonder’s Orchestra, Sirsy, Bovine Social Club) and the Courtyard Marriott (The Lied To’s, Mike Campese).   This provides a great alternative to fireworks for those who would rather stay in place and warmly ring in 2019 with their favorite artists.

For our youngest revelers, the Children’s Museum at Saratoga will open their doors at 4pm and invite families in to discover how different countries around the world put their own spin on New Year’s traditions.  This will be followed by a parade to the Lake Avenue School where kids can eat cotton candy, get their faces painted and enjoy a one-man circus extravaganza featuring Troy Wunderle- the Artistic director of Circus Smirkus’s Big Top tour.  Just down the hall, the award-winning theater troupe, Arm-of-the-Sea, will weave an epic story with beautiful puppets ranging from 12 inches to 12 feet tall!  A lot is going on at Lake Ave School, including a must-see Tribute event with Elvis Presley and Johnny Cash sharing the auditorium stage.  For other great hits from the same era, don’t miss Big Fez & the Surfmatics and Flame, performing at the NBT Bank.

If you are in need of some good humor this New Year’s Eve, make sure to check out the Empire State College Rotunda where Comedy Works will present an array of the best regional stand-ups.  Meanwhile, the Saratoga Arts stage will feature a hilarious original cabaret by FAB the Duo up from NYC for this event.  FAB shares the spotlight with Will Shakespeare who casts and directs classic adventures full of merriment, sword fights, mistaken identities, star-cross’d lovers, shipwrecks, musical numbers… and bear chases all in under 40 minutes!  And, of course, perennial favorite, Michael Ray, will entrance audiences at the Salvation Army with his unbelievable hypnotic powers.

This New Years it is time to get moving! Kevin Richards will lead full floor country line-dancing in the St. Peter’s Parish Center, and later the Saratoga Chamber Players and Tango Fusion will join forces to provide dance instruction for all levels with a flare.  In the City Center, the Grafton Street Trio will play traditional uilleann pipe tunes to the high kicks of the Mise Eire Irish Dancers and the Georgie Wonders Orchestra will close out the evening with old-time romantic big band hits worth every dip and twirl.

A full range of musical genres is represented! If you are in the mood for Jazz, make sure to stop by the Hampton Inn (Roben Kosek Jazz & Blues, Déjà vu Jazz) or St. Paul’s Lutheran Church (Hetko Siegel Syracuse, The New Edge, Michael Benedict).  If you want roots music, you will find what you seek in the Saratoga Springs Post Office (Mark Tolstrup, Jimy Graham).  Temple Sinai is the go-to venue for the hottest new alternative groups in the 518 (Ryan Leddick Trio, Sydney Schizzano, The Onlys) and the acoustically fabulous Military Museum will hold our a cappella groups (The Racing City and Saratoga Soundtrack choruses).  There is truly something for everyone.

Remember, New Year's Eve happens no matter what and so does First Night Saratoga!  All of our performers will be inside their respective locations and our transportation partner, CDTA, is providing free shuttle and bus trips to all of our venues as well as service from the Wilton Mall and Skidmore College.

Saratoga Arts ensures that kids aged 12 and under will be able to attend all First Night Saratoga events for free with the purchase of one adult button (one child per adult).  Buttons are on sale now online and may be purchased as of December 1st at a number of locations listed on our website including Saratoga Arts, area Price Choppers, Stewarts Shops and Adirondack Trusts.