FILM: WHITE CHRISTMAS | Kids Out and About Albany 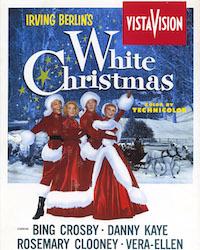 Singers Bob Wallace (Bing Crosby) and Phil Davis (Danny Kaye) join sister act Betty (Rosemary Clooney) and Judy Haynes (Vera-Ellen)to perform a Christmas show in rural Vermont. There, they run into Gen. Waverly (Dean Jagger), the boys’ commander in World War II, who, they learn, is having financial difficulties; his quaint country inn is failing. So what’s the foursome to do but plan a yuletide miracle: a fun-filled musical extravaganza that’s sure to put Waverly and his business in the black. Though the song White Christmas was 1stintroduced in ‘42’s Holiday Inn, a new version of the song was created for this movies’ Irving Berlin score. Not rated. 120 minutes.
Click here for more information about this activity
*Times, dates, and prices of any activity posted to our calendars are subject to change. Please be sure to click through directly to the organization’s website to verify.