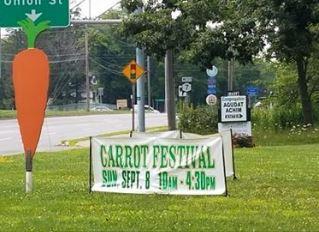 Join us for this fall tradition that features: delicious food, fun activities for children, vendors galore, a community service tent, a farmer’s market with locally grown produce, a "touch-a-truck" area (new this year!), a pet adoption clinic, and of course carrot cake! Music and entertainment are scheduled throughout the day, featuring a special afternoon concert by The Refrigertors and Madison VanDenburg.
Click here for more information about this activity

From humble beginnings, the Carrot festival has turned into a huge event that is enjoyed by the entire community. The event showcases foods and desserts from all over the world – including carrot cake, local produce, music and entertainment, vendors and crafters, a miniature health fair, and plenty of activities to keep kids entertained.The food tent, features traditional Jewish foods such as tzimmes, Israeli salad, hummus, falafel and brisket sandwiches. Hamburgers, hot dogs and portabella mushrooms will be cooked on the grill, and chicken dinners will be available.

There will be vendors and crafters, concerts, kids' activities, and of course carrot cake!

The congregation always gets requests for its carrot recipes, so they compiled a cookbook, which is sold throughout the world, of all the congregation’s favorite Carrot Festival recipes, in addition to other kosher recipes.Copyrighted in 2006 the cookbook titled “Divine Kosher Cuisine,” features some recipes, which are derived straight from the Carrot Festival.

All Ages Adults & kids together